Kenya has over 400 recorded mammal species, second only to the Democratic Republic of Congo in Africa and tenth in the world. With such a huge number a few these mammal species are certain to be endemic. An endemic species is one whose habitat is unique to a defined geographical location, such as a country, an island or a defined zone of analysis.

Endemism is different from indigenous or native species in that the latter is also found elsewhere. Endemic species run a high risk of extinction due to changes in their confined habitats, particularly due to hunting and habitat destruction.

With tourism being a major foreign exchange earner in Kenya, it is  important that the country preserve and maintain it’s rich bio diversity being the main facet that attracts tourists.

At bountiful safaris we believe tourism can effectively provide the incentive for promoting wildlife conservation, by visiting some of these isolated habitats thus providing economic incentive for their protection and also providing revenues to continue supporting conservation efforts.

Here we highlight the plight of 3 endemic and endangered mammal species in Kenya.

One of the world’s rarest and most endangered antelope, the Hirola is endemic to north-east Kenya and south-west Somalia. The Somalian population is believed to be extinct.

The Hirola is slender with a sandy colored coat, male Hirolas however turn a shade of gray as they age. The have an elongated face, long legs and a short neck.  A white line, or chevron, passes from one eye to the other across the forehead, giving the Hirola a bespectacled appearance. 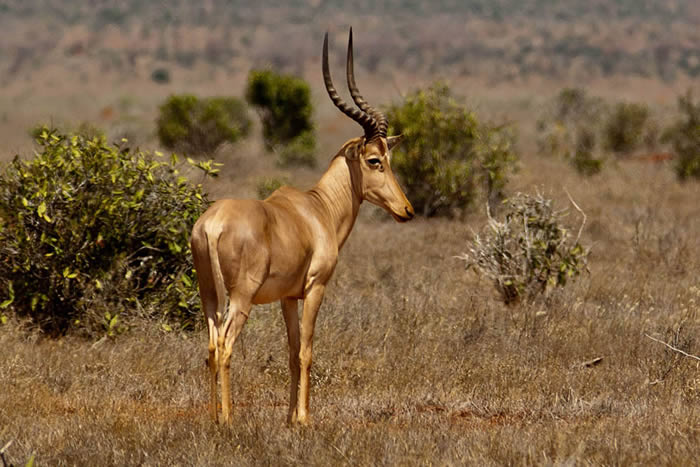 The Hirolas are well adapted to their hot arid plains habitat that are characterized by short grass and dry acacia bush.  They use their large molars to chew the coarse grass.

Their range, a restricted  area of approximately 7,600 km² along the border of Kenya and Somalia is well outside any official or gazetted national parks, thus increasing their vulnerability especially to hunting and habitat encroachment.

Once common throughout East Africa, the species has suffered a devastating decline in the last 30 years, with numbers plummeting from around 14,000 in the 1970s to an estimated less than 500 today.

Bongos are definitely one of the most unique, colorful and spectacular antelopes in the planet, immediately recognized by their striking reddish chestnut coat with black markings, conspicuous white stripes and long spiraling  horns. 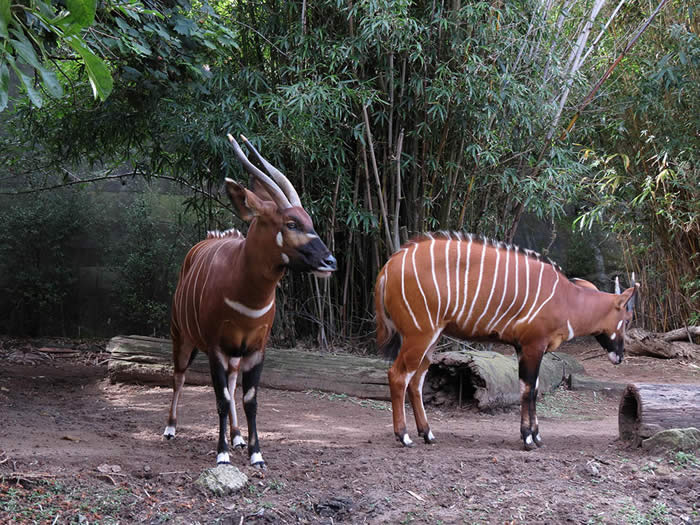 The Mountain Bongo was once numerous in  the forested zones of Mt. Kenya, the Aberdares, Mau, Cherengani hills and Mount Elgon. Their numbers have declined dramatically over the past 40 years and now confined to  isolated populations in patches of forest on Mt. Kenya, and the Aberdares. Mountain Bongos are classified as Critically Endangered (CR) on the IUCN Red List.

The decline has been caused by a combination of several factors mainly loss of habitat, hunting and livestock-mediated diseases. Because of its beauty and relative scarcity, the Mountain Bongo was long viewed as a prized trophy by hunters. Their population in zoos far exceeds that which is in the wild.

KWS in conjunction with conservation organizations have formulated a number of conservation strategies for the species, among which include conducting regular surveillance and security patrols for the remaining wild mountain bongos.

A robust captive population of 526 individuals (as of December 2003) flourishes in several locations around the world, and a collaborative project known as the Bongo Repatriation Program is being used  to re-establish a viable wild population in Mt Kenya and the Aberdares.

Currently the status of mountain Bongos in the wild is still uncertain with their population still small, fragmented and vulnerable to extinction.

The Tana River Mangabey is a medium-sized monkey characterized by a long tail and a yellowish-brown coat. It has a conspicuous crest on it’s crown and white eyelids that stand out conspicuously against its jet black face. 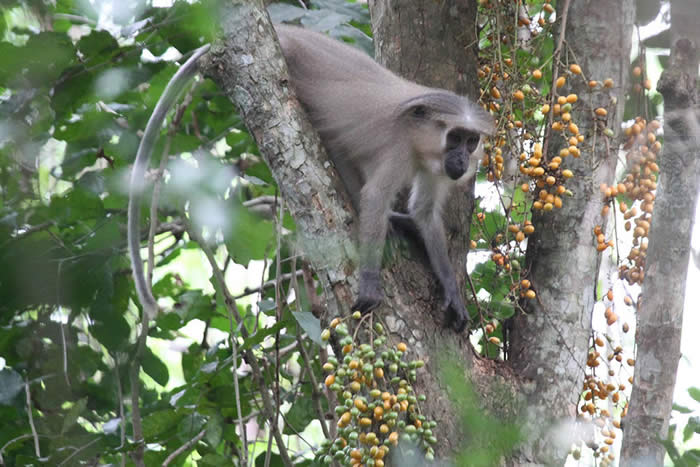 The species is highly endangered and is endemic to  a fragmented riverine forest mosaic along the lower Tana River in the coast region of Kenya. These forests are naturally fragmented due to the meandering course of the river and its fluctuating water levels.

Mangabeys are highly dependent on the forest for their survival. Much of their diet is composed of plant material from the canopy or sub-canopy of the forest.

The forest has over the years been degraded through unsustainable forest clearing (an estimated that 50% of the original forest has been lost in the last 20 years ) and resource extraction (felling of  trees for canoe construction, wild honey collection, and palm fronds used for thatching and mats) resulting in a rapid decline of the species.

Tana River mangabeys are ranked as one of the worlds 25 most threatened primates. Currently there are an estimated 1000 – 1200 individuals remaining in the wild.

Habitat destruction continue to be the main cause of the Tana River Mangabey decline and an effective conservation approach is desperately needed. Past conservation efforts have not been successful.

Solutions must be found for the problem of forest clearing, and the harvesting of forest products must be better managed, if there is any chance of protecting the habitat of this critically endangered primate and forestalling its otherwise imminent extinction.