Africa’s Great Rift Valley is one of the world’s most distinctive geo-morphological features, cutting through the continent from from Syria in the Middle East, right down to Mozambique in south-eastern Africa. A section of this massive fracture line in the earth’s surface, transects Kenya from north to south and is marked by a chain of fresh water and soda lakes. Nestled in the eastern arm of Rift Valley floor, the Kenyan Rift Valley covers three spectacular soda lakes –  Nakuru, Bogoria and Elementeita.

These three lakes are generally shallow, alkaline lakes with relatively small inlets and no surface outlets. Straddling the floor of the Rift Valley, these lakes are dominated by dramatic escarpments, interspersed by volcanoes, steaming Fumaroles, hot springs and are the setting for one of the Earth’s greatest wildlife spectacles – the feeding and movement of massive flocks of lesser flamingos. The alkaline lake waters support a prolific growth of green algae (Spirulina platensis), the main food of the itinerant Rift Valley population of lesser flamingos which congregate in the lakes in great numbers.

Lying at an altitude of 1670 metres ASL, Lake Elementaita is one of the lesser-known ‘soda lakes’ in Kenya’s Rift Valley. The Lake derived it’s name from the maasai word ‘muteita’ meaning ‘dust place’. The reference aptly describes the dusty conditions in the area especially during the extreme hot dry January to March period. The lake is fed by two small streams flowing from the eastern plateau. Majority of the inflow however comes from the ‘kekopay’  hot springs bubbling up at the south end of the lake. The lake is very shallow (< 1 m deep) and during the dry season is characterized by expansive mudflats.

Besides attracting flocks of  flamingos which feed on it’s algae, the lake basin area has over 400 recorded bird species including quite a number of migrating birds from northern Asia and Europe. A number of low, rugged, lava-rock islands in the shallows are the nesting site of the Great White Pelican. At hatching time, the rocks are completely covered with the downy grey fledglings of 8000 breeding pairs of birds. 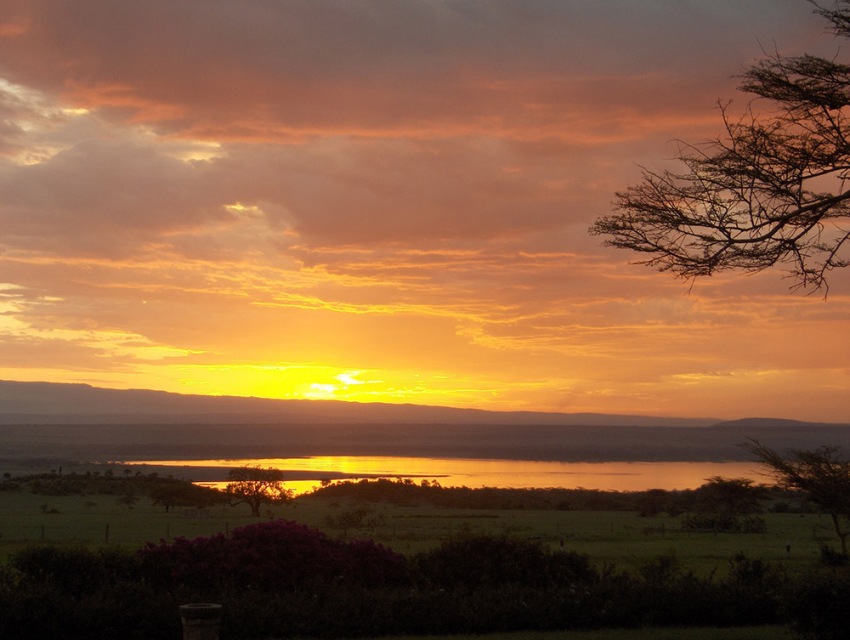 Most of the area is protected, with conservancies holding a large part of the surrounding lake shore and is home to a variety of wildlife such as cheetah, water buck, jackal, leopard, lion, zebra, warthog, gazelle, eland, buffalo and giraffe.

Lake Elementaita is less than two hours away by road from Nairobi and offers an excellent opportunity to savor the magnificent Rift Valley landscape such as  the lava outcropping, escarpments and ancient volcanic peaks above the soda lake carpeted with bird life.

The most famous of the three soda lakes, the sky-mirrored pink-frosted shores of Lake Nakuru created as a result of millions of flamingos flocking to feed on the lake’s teeming algae is described by many as one of the greatest bird spectacles on earth. 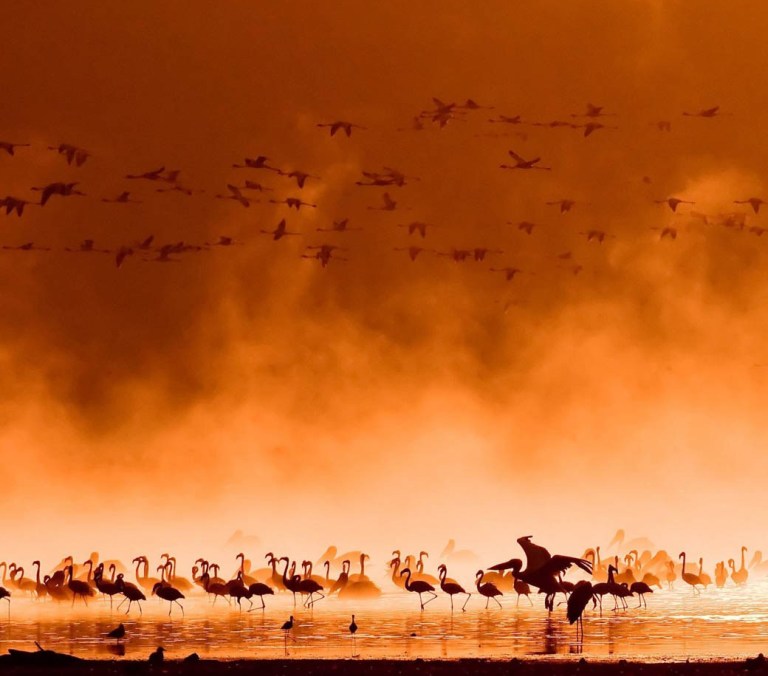 Lake Nakuru_Flamingos-Image source Get In Travel

Alkaline from past volcanic activity in the now-inactive Menengai volcano a few miles from the lake and droppings of millions of birds create a unique chemistry that produces a bumper crop of algae along the margins, which the birds consume in huge quantities. Flamingo are not the only avian attraction, also present are a wide variety of other birds (over 400 recorded species) which include the pelican, African fish eagle, verreaux’s eagle and goliath heron. 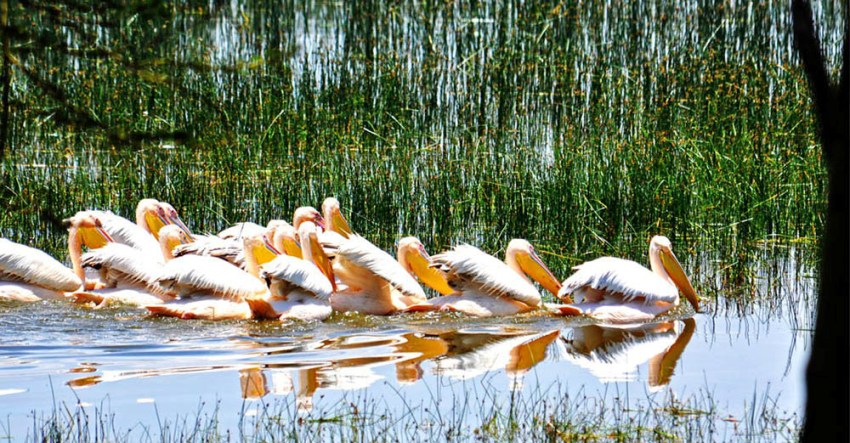 The lake is part of the Lake Nakuru National Park an area encompassing 73 square miles surrounding the lake which apart from providing  the continent’s largest bird sanctuary is also a protected parkland for black rhinos, white rhinos and Rothschild giraffes. These species were trans located from other parts of Kenya as a protective measure and join the numerous wildlife species that inhabit the park.

Lake Nakuru is a popular destination with numerous hotels and lodgings at and the nearby town of Nakuru. There are also individual luxurious tented camps typified by en-suite baths, private verandas and evening meals under the stars. Hot air balloon trips are also a popular way to enjoy the view over both Lake Nakuru and the surrounding park.

The northern most of Kenya’s ‘soda Lakes’ Lake Bogoria is less well-known than Lake Nakuru to its south. The lake is extremely salty and has a saline content about twice the density of sea water, making it devoid of most aquatic life. Like the other lakes, volcanic minerals enrich Bogoria’s waters with algae, providing an ideal environment for hundreds of thousands of the lesser Flamingos. The expanse of water and the ever-present flamingos provide a dazzling and welcome break from the stark arid bush and scrub surrounding.

The Lesser Flamingo is not the only bird-life frequenting Lake Bogoria. A total of over 500 species of birds have been recorded near the lake. A significant amount of raptors stands out: steppe eagles, fish eagles and tawny eagles are present in large numbers, feeding on the abundance of weak or disabled flamingos.

Flamingos are not the only attraction in the Lake, the other are geysers. Lake Bogoria is the most volcanicly active of the 3 lakes.  It’s shores are fringed by bubbling hot springs and gushing geysers. The geysers and hot springs are a marvel to behold. Some of the geysers send hot water up to 17 feet into the air. Their activity is however sporadic and appears to depend on lake levels and resulting water pressure.  Some of the geysers and springs are very hot; others are safe to touch but appear to boil because of the carbon dioxide in the water. A couple of the springs have been cleared as safe for bathing. 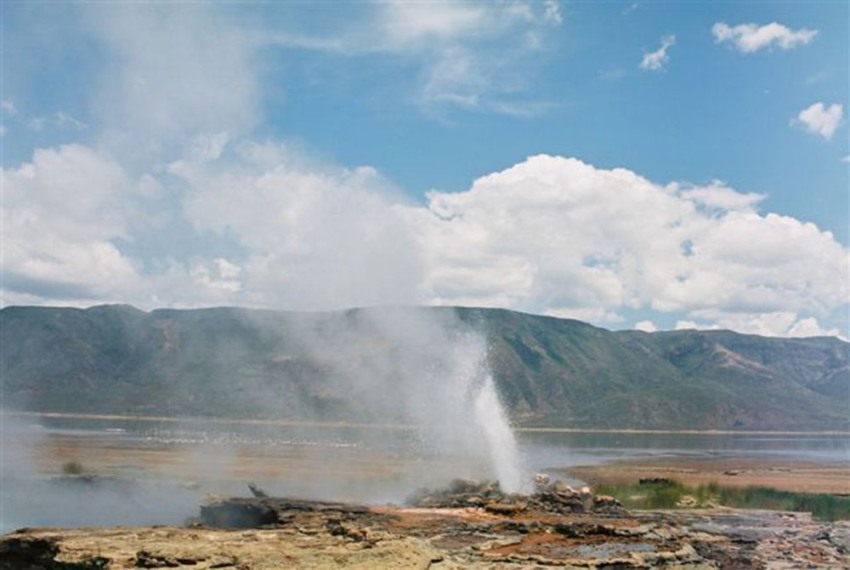 Lake Bogoria lies farther to the north away from any major town, so it is more off the beaten track. It also has much less tourism-related development than Lakes Nakuru and Elementaita.

Kenya’s soda lakes especially Lakes Elementaita and Bogoria await your exploration. Plan to carry your camera for the excellent photographic opportunities. Don’t forget a pair of binoculars and a good bird identification book for your birding experience. Rest assured you’ll want to come back again and again to this beautiful Lakes.